Even if it took a wagon and a five-gallon bucket, a group of men living in east Cape Girardeau County were determined to bring a fire protection service to their neighbors.

With an increasing number of volunteers, the East County Fire Protection District has come a long way since its humble beginnings 30 years ago. Currently, 37 men and women volunteer for the department.

"We didn't have a truck. We were still with garden hoses," said Dwayne Kirchhoff, the district's fire chief. "We were the only ones in Cape County without a fire district or a fire department. People were really putting them out with garden hoses and the old-fashioned bucket."

Equipment is no longer an issue for the East County crew, who at an open house Sunday celebrated with the community all it's accomplished since announcing its formation years ago at a meeting at Nell Holcomb School.

The fire department wasn't able to search for a truck and send out bids until 1986, when voters in the district approved a tax levy for operations. Prior to the vote, the district relied heavily on community donations. The district held regular fundraisers and every resident, including each firefighter, was asked to donate $50 annually to the district.

"We had quite a few that refused to pay because they didn't think we would survive. Not everyone supported the department when we first started," Kirchhoff said.

The district also relied on the construction skills of its firefighters. Firefighters painted donated trucks -- their second was an old milk truck -- and built a lot of their own tools. Kirchhoff said the department's first truck, a 1955 Chevrolet pumper, was purchased after several members of the department contributed some of their own money and signed a lease.

"Firefighters built their own fittings. The guys on the department, they were fabricators," said Kirchhoff, who's been with the department all 30 years. "It made us appreciate what we had."

Without the tax levy -- each household pays 30 cents per $100 assessed valuation -- many members of the department and district board members say they may not be as far along as they are today. On average, the tax brings in $225,000 annually, according to the department's treasurer, Kelly Allen. The district protects about 4,000 residents.

John Simmons, a district board member and former firefighter, said it's the one tax that will save residents money.

"You can't get a lower ISO rating without a constant source of funding," Simmons said.

The East County district ranks as a class seven, a rating given by the Insurance Services Office based on a department's water supply, the engines it operates and how well they respond to fire calls. Homeowners' insurance quotes are mostly based on the district's fire suppression rating and how close the home is to a fire station. The rating is given on a one to 10 scale and departments aim for a low rating.

Kirchhoff said to rank as a class seven without many hydrants in the district is almost unheard of, but they earned the rating due to how many pump trucks they store at their three stations. After the Indian Creek hall was built in in the mid-1990s -- the two others are at Egypt Mills and Hanover -- every homeowner in the district is five miles or less from a fire station.

"We try to use the taxpayer's money to their advantage and use it effectively," said Simmons, one of five board members representing the district.

East County elected last year to operate a five-member board after years of keeping a three-person panel. After a reorganization of the board and suggestions from the East County district community, members voted to expand the board.

Kirchhoff said a five-member board is the only way to go.

"Three-member boards have the potential for buddy systems," he said.

The recent reorganization was the second in board history, according to Kirchhoff. Nearly 20 years ago, a group of firefighters part of the initial department formation left, he said, due to a disagreement.

While Kirchhoff didn't want to elaborate, he said it had to do with some legal issues. The issue caused the chief at the time, Ron Cotner, and other members to resign.

"I never, ever, like to see people leave upset. Both times, people that left were dedicated to the department gave a lot of hours and parts of their lives to this," Kirchhoff said. "But, when you get differences of opinions and politics involved you have that potential."

Steve Mirly, now a captain in the district, joined East County in November 1990. While he is also on the Cape Girardeau Fire Department, a paid crew, he said he enjoys working for a volunteer district, too, because of the relationships you build with the community.

"A lot of us are neighbors. We can get there quicker and we know the area," Mirly said.

He added that often with a volunteer department the men and women who join come with different levels of experience.

East County residents Heather and Derek Dickerson, with their young children John and Ellie, have lived in the district for nine years. Heather Dickerson said Sunday she and her family most likely wouldn't have moved to a district without fire protection.

"I hadn't really thought about it before, but I definitely wouldn't have wanted to go where there wasn't," she said. "I know they've been here a long time. It's a great service." Structure Fire off of Co Rd 621

The call came out at 05:16 am and the structure was a total loss.

Barn Fire on State Hwy V on 9-25-2012   FRUITLAND, MO (KFVS) - Fruitland firefighters battled a barn fire Tuesday afternoon. Firefighters responded at 2:45 p.m. to the Tom Farrow farm at 4991 Route V near Fruitland. Two above-ground fuel tanks, one gasoline and one diesel, were near the fire. Neither one exploded. East County Fire Protection District provided equipment and men to assist Fruitland. About 20 people responded to the scene. The barn was destroyed.  No one was ...

Hay bail fire on Co Rd 607 early in the morning

Structure Fire off of Co Rd 654, Garage and vehicles.

Even if it took a wagon and a five-gallon bucket, a group of men living in east Cape Girardeau County were determined to bring a fire protection service to their neighbors. That was March 1981. With an increasing number of volunteers, the East County Fire Protection District has come a long way since its humble beginnings 30 years ago. Currently, 37 men and women volunteer for the department. "We didn't have a truck. We were still with garden hoses," said Dwayne Kirchhoff, the ...

From the SE Missourian Fire crews from Cape Girardeau, Perry, Bollinger, and Scott counties battled a natural cover fire that burned through 50 acres of land near Neelys Landing in Cape Girardeau County Sunday, April 3, 2011.   http://www.semissourian.com/gallery/7153     A fire on Cissus Lane, near Neelys Landing , is under control, according to Ralph Birk, the Fruitland Fire Department's assistant chief. The fire was still burning but firefighters who remained on scene...

From SE Missourian - Cape Girardeau MO   The state fire marshal's office will investigate a Cape Girardeau fire that wiped out a duplex on West Cape Rock Drive Monday morning. No injuries were reported, though fire officials said one person went to a hospital in a private vehicle. Firefighters battled the blaze for 2 1/2 hours after responding to the call at 8:10 a.m., said Dwayne Kirchhoff, chief of the East County Fire Protection District. The cause was undetermined and is still u...

A man was seriously injured in a truck wreck near Trail of Tears State Park Thursday morning. The rollover wreck happened at 6:30 a.m. on Highway 177 near Goode Lane. According to the Missouri Highway Patrol, 47-year-old Phillip Brethold of Cape Girardeau was driving a 2003 Chevrolet truck south when it appears he lost control and hit a tree. The truck came to a rest on its side with a tree crushing the cab. According to the crash report Brethold was partially ejected ...

Firefighters from several departments battled a blaze for several hours on a mobile home in Cape Girardeau.  No one was injured.  http://www.semissourian.com/story/1662078.html

Called for Mutual Aid to Fruitland FD for a woods fire. 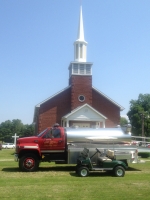 How is the ECFPD Doing?

Working Together for Home Fire Safety More than 3,500 Americans die each year in fires and approximately 18,300 are injured. An overwhelming number of fires occur in the home. There are time-tested ways to prevent and survive a fire. It's not a questio...

Copyright © 2006-2021. YourFirstDue Inc. All Rights Reserved. Designated trademarks and brands are the property of their respective owners. Content on this web site is supplied by East County Fire Protection District. YourFirstDue Inc. cannot be held responsible or liable for any content, text, pictures, or any other media found on this web site. Maintained by the members and staff of East County Fire Protection District.
Management Login
Powered by